Early on Friday 4 June, Virgin Australia Boeing B738-800 VH-YQO was spotted at Mackay Airport. It had arrived the previous evening late on Thursday 3 June as VOZ621 from Brisbane.  It had earlier also completed two other visits to Mackay Airport and this was the first time that the recently (re-)delivered aircraft has visited Central Queensland since it was returned to Australia in late-April. 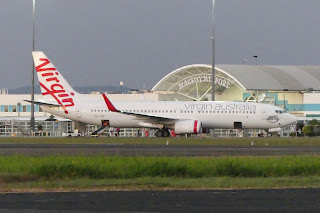 The B737-800 was previously operated by Virgin Australia as VH-YFQ and was one of five aircraft that were re-registered and ferried back to lessors in the USA in 2020. VH-YFQ took up the registration marking 2-VYFQ and ferried out of Australia in mid-September 2020.

On Friday 23 April, 2-VYFQ arrived back in Australia from the USA and promptly took up the registration marking of VH-YQO.  It re-entered services with Virgin Australia Saturday 22 May.

Of interest, it appears that VH-YQO is still named 'Whiting Beach'.

The third Boeing B737-800 VH-YQR (ex VH-YFP / 2-VYFP) which also recently returned to Australia, entered service also on Thursday 3 June.  We hope to see it back in CQ soon.
Sincere thanks to local plane spotter 'JM' for taking the time to capture and send through this great photo!
Photo taken by 'JM'  ©
Posted by Damian F at 7:30 PM