During the Second World War, the United States Army Air Corps established rest and recreation facilities in Mackay. From the end of January 1943 until early 1944, thousands of United States servicemen were ferried almost daily from New Guinea to Mackay by air transport to spend around 10 days R&R. They were usually carried by two B-17 Flying Fortresses converted for transport duties and an LB-30 (civil transport version of the B-24 Liberator bomber), stationed in Mackay with the 46th Troop Carrier Squadron, whose parent Unit was stationed in Townsville, Queensland.
On Monday 14 June 1943, just before dawn, at about 6 a.m., Boeing B-17C, Serial/Tail Number 40-2072, known as "Miss Every Morning Fixin", took off from Mackay headed for Port Moresby. There were six crew and 35 passengers aboard. A few minutes after take-off, it crashed, at Bakers Creek, 8km South of Mackay, killing all but one of those on board.

Local residents gathered at the Bakers Creek Memorial site to commemorate the 70th anniversary of the crash in 2013, and to mark the occasion, a booklet titled 'Biosketches of the Fallen', has been published.

The memorial was constructed in Bakers Creek in 1981 consisting of two brick columns aligned northwards on which are mounted flag poles and two brass plaques facing eastwards. Between the columns is a large aircraft propeller of a type fitted to Douglas C-47/DC-3/Dakota airplanes that was supplied by the Royal Australian Air Force. The plaques describe the crash and list the men known to have perished as well as the sole survivor. Fixed above the propeller is a bronze model of a Flying Fortress aircraft that was added on 13 June 2003.

Another memorial located behind the Australian embassy in Washington D.C. commemorates the accident. Because embassies are considered foreign soil, the Bakers Creek Memorial Association petitioned American lawmakers to relocate the memorial. After several years of negotiation, a dedication ceremony took place 11 June 2009 at the memorial's new home just north-west of the Selfridge Gate in Fort Myer, Virginia. 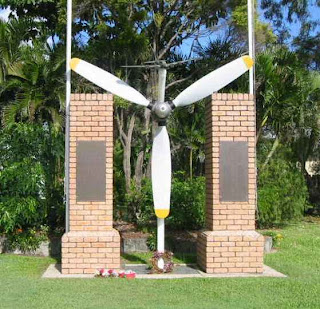 More information can be found at Peter Dunn's Australia At War website (www.ozatwar.com).
Posted by Damian F at 8:32 AM