On Saturday 19 June, a pair Royal Australian Air Force (RAAF) Boeing P-8A Poseidon Maritime Surveillance Aircraft were noted completing airwork including a missed approach each at Rockhampton Airport.
Poseidon A47-006 was heard to be flying as "Mariner 06" and looked to fly down from Townsville where it had arrived the previous day from its home at RAAF Base Edinburgh in South Australia.
Poseidon A47-003 as "Mariner 07" also flew down from Townsville and had also arrived up there from Edinburgh the previous day.  It is pictured below on finals to Runway 15 at Rocky. 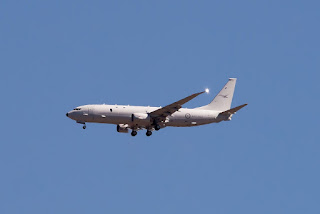 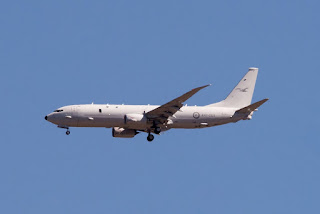 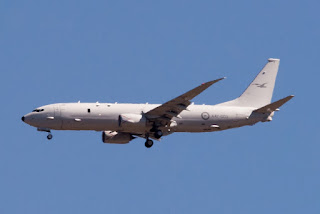 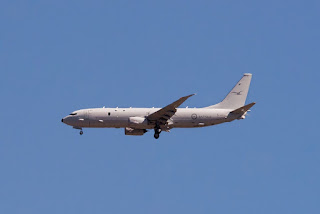 After completing their airwork, both Poseidons departed the Rockhampton Airport and headed back up towards Townsville where they then headed off-shore to complete exercises to the North-East of Townsville.
Of interest, the radio callsign of "Mariner" is of the RAAF's 292 Squadron.

With the RAAF's retirement of the AP-3Cs with Boeing P-8 Poseidons, No. 292 Squadron will remain part of No. 92 Wing and will begin the first local training course using the new type. A new operational conversion facility has been constructed at Edinburgh to facilitate this training.
It is believed that the Poseidons may be participating in the Australian Defence Force (ADF) Exercise Sea Explorer which is being held in North Queensland.
Meanwhile, also on Saturday 19 June, RAAF Search and Rescue (SAR) (CHC Helicopters Australia / Lloyd Helicopters) Agusta AW139 helicopter VH-SYJ "Choppa 42" passed through Roma and Longreach Airports while flying from RAAF Base Amberley to Mount Isa.  It is due to continue to Darwin in the Northern Territory in the coming days to support Exercise Rogue Ambush which is also being held up in the Top End.
Sincere thanks to local plane spotter Scott H for taking the time to capture and send through these great photos!
All photos taken by Scott Harris  ©
Posted by Damian F at 8:06 PM