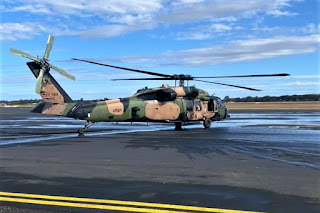 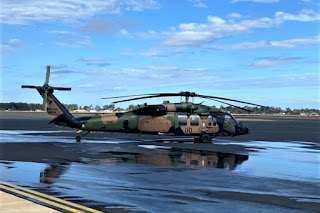 It appears that they departed RAAF Base Amberley with two of the four calling into Bundaberg Airport, before all four then touched down at Rockhampton Airport.
Some then called into Mackay Airport with all four eventually ending up in Townsville. 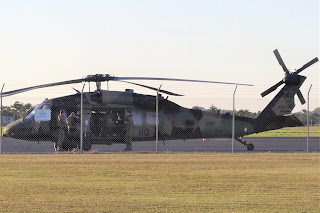 The four Blackhawks were identified as A25-104 as "Disco 91", A25-110 as "Disco 92", A25-223 as "Disco 93" and A25-206 as "Disco 94".
All four Blackhawks are believed to be flown by the Australian Army's 171st Aviation Squadron (forming part of the 6th Aviation Regiment) based at Holsworthy Barracks near Sydney.
While not 100% confirmed, the four Army Blackhawks could be in Townsville for somber reasons with the 25th anniversary of the Townsville Blackhawk Tragedy.
On Wednesday 12 June 1996, during a Blackhawk training exercise near Townsville, 18 men died when two helicopters collided mid-air and crashed.  The Special Air Service (SAS) Regiment and Army Aviation Corps involved were carrying out a night-time counter-terrorism training operation, in preparation for the upcoming 2000 Sydney Olympics.
Photos taken by Hayden Alexander and 'JM'  ©
Posted by Damian F at 9:20 PM