On Wednesday 30 June, recently arrived American Registered Pilatus PC-12/47E N81DW was spotted at Emerald Airport.  It had arrived late on Tuesday 29 June from the Sunshine Coast having visited earlier in the day also from there. 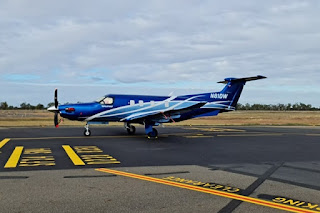 A little later on Wednesday, N81DW departed Emerald Airport for the Sunshine Coast once again before then flying all the way down to Melbourne (Moorabbin).
Of interest, N81DW was only registered around a fortnight ago and arrived into Australia from overseas at Adelaide last week.  I suspect it could have taken up residence here in Australia.

Also noted visiting Emerald Airport, also on Wednesday 30 June was BK Hire (Toowoomba) Piper PA-31-350 Navajo VH-TTX which completed its weekly flight from Toowoomba up to Collinsville Aerodrome via Emerald Airport and back.

Meanwhile, over at Mackay Airport, also on Wednesday 30 June, Avcair (Avgunn) LearJet 60 bizjet VH-ILJ visited from its Brisbane base.
Up at Hamilton Island Airport, Graham Aviation (Cairns) Cessna 510 Citation Mustang bizjet VH-FNI was noted visiting Hamilton Island Airport, arriving from Cairns and later departing to Mareeba.
And the Queensland Government Airwing (State of Queensland) Raytheon B300 Super King Air VH-SGQ also visited from its Brisbane base.
Finally, a couple of other lighties around some Central Queenslnad Airports, also on Wednesday 30 June, included Raytheon A36 Bonanza VH-YGM which departed Rockhampton Airport for Armidale.  It then returned to Rocky later in the day.
Former Air Charter CQ / Australia by Seaplane Found Aircraft Canada Bush Hawk XP VH-OOB flew up from Gladstone Airport to Rockhampton Airport before later returning there.  It is also for sale at the moment too!
McNab Aviation Cessna 414A VH-FKH visited Bundaberg Airport from its Toowoomba base.

And New South Wales based Birss Aviation Services Piper PA-31-350 Navajo VH-OMN landed at Biloela / Thangool Airport from Moruya and Narrabri before it then departed to Hamilton Island Airport.
UPDATE!  VH-OMN returned to Moruya over the same route on Monday 5 July.
Photo taken by 'AC'  ©
Posted by Damian F at 9:24 PM