On Saturday 19 June, Skytrans Airlines Dash-8-100 VH-QQF was spotted as it arrived into Rockhampton Airport from Cairns as SKP9008.
It is believed to have brought the Northern Pride Under 19 Rugby League team to town to take on the local CQ Capras Under 19s in the latest round of the Queensland Rugby League's Hastings Deering Colts Competition. 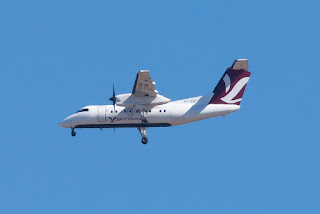 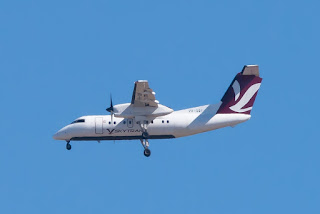 VH-QQF returned to Cairns from Rockhampton Airport after dark again as SKP9008.
Meanwhile, also on Saturday 19 June, fellow Skytrans Airlines Dash-8-100 VH-QQG was noted visiting Mackay Airport.  It too arrived from Cairns but as SKP9005.
We aren't sure which sports team it brought to town (if it did) but VH-QQG returned to Cairns also after dark and again as SKP9005.
Finally, also on Saturday 19 June, Aero Logistics Cessna 441 VH-YFD departed Rockhampton Airport for its Gold Coast base after completing a few weeks of aerial flights around the area.
And LifeFlight Leonardo S.P.A. Helicopters (Agusta) AW139 helicopter VH-XIB was noted passing through Birdsville and Charleville Airports while returning to Archerfield after spending some time operating in Western Australia.  It had flown over there in the middle part of April.
Sincere thanks again to local plane spotter Scott H for taking the time to capture and send through these great photos!
All photos taken by Scott Harris  ©
Posted by Damian F at 1:15 PM