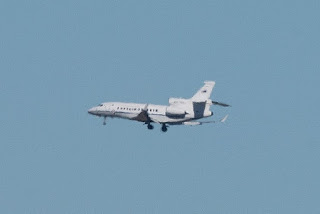 The Falcon 7X bizjet, which is flown by the RAAF's VIP 34 Squadron, looked to arrive from Sydney as "Envoy 03". It looked to fly there from Canberra late on the previous day.

After a few hours on the ground, A56-003 then departed Rockhampton Airport and flew direct back to Canberra.