On Thursday 17 June, Avcair (Avgunn) LearJet 60 bizjet VH-OLJ was noted visiting some Central Queensland Airports while on a busy day of flying out of and back to Brisbane.
It initially called into Rockhampton Airport from Brisbane before then flying across to Longreach and then Emerald Airports.  VH-OLJ then returned to Brisbane.
Mackellar Mining Equipment / Flight Options (Australia) Cessna 560 Citation Ultra bizjet VH-MMC was flying up to Emerald Airport from the Sunshine Coast, but due to bad weather in the area, it diverted to Biloela / Thangool Airport.  VH-MMC then flew up to Middlemount Aerodrome before then flying across to Rockhampton Airport (pictured) and back to the Sunshine Coast. 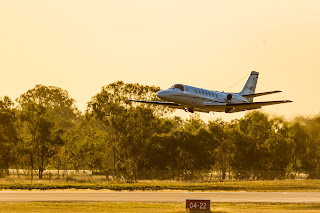 Balmoral Air Dassault Falcon 2000LX bizjet VH-WIO was noted back at Hamilton Island Airport yet again.   It arrived from and later departed back to its Bankstown base.

Meanwhile, also on Thursday 17 June, Sabstall Beech B200 King Air VH-NME flew up from Toowoomba-Wellcamp to Rockhampton Airport.  It then departed to its Toowoomba (City) base.  VH-NME had earlier completed a flight to Roma Airport and back from Wellcamp.
Seair Pacific / Istlecote Cessna 208 Caravan VH-TQW was noted flying up from Hervey Bay (Fraser Coast) Airport to Middlemount Aerodrome before flying back down to Maryborough and Hervey Bay Airports.
And Pilatus PC-12/45 VH-PID was noted departing Rockhampton Airport for Toowoomba,  It had arrived into Rocky on Wednesday 16 June, flying up from Toowoomba but having to divert to Gladstone Airport for some time due to fog at Rockhampton Airport.
Fianlly, also on Wednesday 16 June, Brisbane-based Hewitt Cattle Australia P/L SOCATA TBM 700 VH-PGA flew from Moura Airport to Middlemount and then Biloela / Thangool Airports and back to Archerfield.  It had flown up from Archerfield via Dalby the previous day.
While Machjet (Machjet International) Beech B200 King Air VH-PUY called into Hervey Bay (Fraser Coast) Airport from the Sunshine Coast before then continuing up to Charters Towers Aerodrome.
And the locally-based Embraer EMB-550 Legacy 500 bizjet N142GZ was back in the air, noted completing a return flight from Mackay Airport to Brisbane back.
All photos taken by Steve Vit  ©
Posted by Damian F at 11:21 PM