On Tuesday 22 June, Machjet (Machjet International) Cessna 525A Citation CJ2 bizjet VH-ZIY was spotted by me as it departed Clermont Aerodrome. 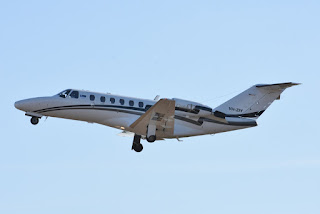 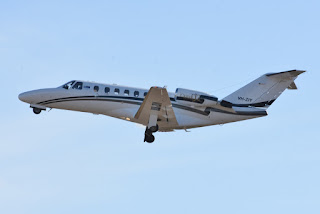 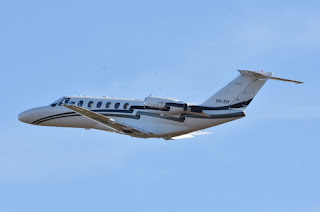 VH-ZIY had earlier flown up from the Sunshine Coast and Brisbane to Emerald Airport before it made the short hop up to Clermont Aerodrome.  It returned directly to the Sunshine Coast.
Meanwhile, also on Tuesday 22 June, another nice bizjet to call into the region again was Poolhurst Aviation Air Charter Services Pilatus PC-24 jet VH-VTF which flew into Hamilton Island Airport from Adelaide.  It then departed to the Gold Coast and then Archerfield.
AirMed Australia Cessna 510 Citation Mustang bizjet VH-SQY was noted visiting Mackay Airport.  It looked to fly up from Bankstown and after dark has returned there flown back South to Tamworth and Newcastle (Williamtown).
And Bowenville (near Toowoomba) based Cessna 525 CitationJet CJ1+ bizjet VH-JSZ departed Rockhampton Airport for Natal Downs. It had arrived into Rocky the previous day from Archerfield via Dalby.
Finally, also on Tuesday 22 June, Perth (Western Australia) based Awesome Aviation Beech 1900D VH-JYA touched down at Rockhampton Airport from Cairns and Horn Island.  It had flown across to Cairns from Perth via Alice Springs the previous day.
UDATE!  On Wednesday 23 June, VH-JYA departed Rockhampton Airport and flew back up to Cairns before it then continued to Weipa, Bamaga and Horn Island.  It finished the day back at Cairns.

Bakersair (Merimbula) Beech 95-B55 Baron VH-IGB departed Rockhampton Airport for the Ballina / Byron Bay Gateway Airport.  It had arrived over the weekend from Townsville having originally flown North the previous weekend to that.

And Armidale-based Piper PA-39 Twin Comanche VH-TDL arrived into Rockhampton Airport from Cairns.  It had flown North via Charleville and Charters Towers Airports during the middle part of last week.
UPDATE!  On Wednesday 23 June, VH-TDL departed Rockhampton Airport for Armidale.
Posted by Damian F at 9:21 PM