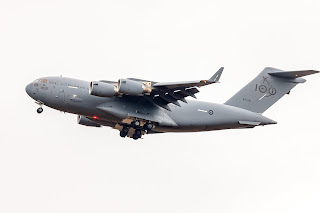 A41-210 looked to depart RAAF Base Amberley and flew straight up to Rocky.  After completing the missed approach, the C-17 then flew back South via an inland route, overhead Emerald and near Charleville, before then returning to Amberley where it reportedly completed a spectacular tactical approach and descent from 20000 feet.
As shown, A41-210 still wears additional decals to commemorate the RAAF's 100th anniversary.
A41-210 was heard to be using the radio callsign of "Stallion 57".
Photo taken by Steve Vit  ©️
Posted by Damian F at 8:17 PM