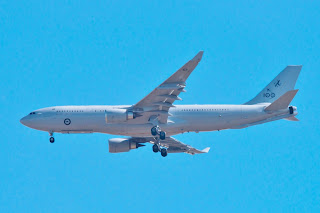 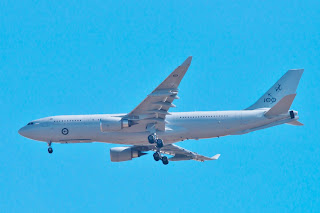 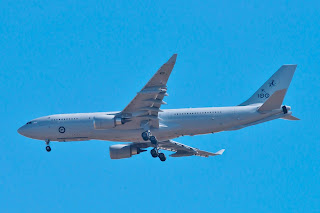 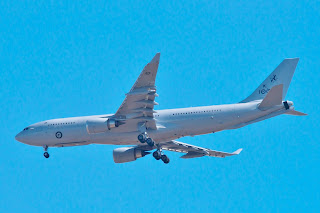 It had earlier departed RAAF Base Amberley and flew up to and landed at Cairns.  A39-002 then departed Cairns and completed a missed approach at Rockhampton Airport before then returning to Amberley.
A39-002 was noted  to be flying as "Dragon 61".
And as shown, A39-002 still wears additional decals to commemorate the RAAF's 100th anniversary.
Meanwhile, also on Tuesday 22 June, fellow RAAF Airbus A330-200 / KC-30A MRTT A39-004 spent more than four hours flying off the South-East Queensland coast completing air-to-air refuelling exercises, including with RAAF Boeing C-17A Globemaster III transport aircraft A41-212 and A41-207 which were both also noted completing a touch-and-gos at Bundaberg Airport.

A41-212 was flying as "Stallion 74" and flew up from Amberley to complete the touch-and-go at Bundaberg Airport before heading off the coast to join the KC-30A.  Both later returned to Amberley.
While after dark, A41-207 as "Stallion 73" departed Amberley to join the KC-30A before it then flew up to Bundaberg Airport where it looked to land, taxi back to the end of the Runway, and then depart back to Amberley.
Sincere thanks to local plane spotter Scott H for taking the time to capture and send through these great photos!
All photos taken by Scott Harris  ©
Posted by Damian F at 10:16 PM