On Friday 4 June, Royal Australian Air Force (RAAF) Boeing C-17A Globemaster III A41-209 was noted completing airwork at some Central Queensland Airports.  It looked to fly up from RAAF Base Amberley to complete missed approaches at Rockhampton and Proserpine (Whitsunday Coast) Airports. 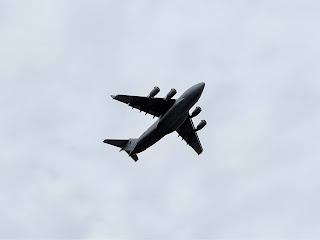 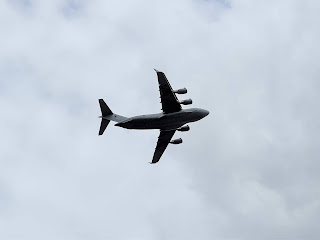 The Globemaster then continued up to Townsville where it completed a touch-and-go.  It then flew back to Amberley but via another missed approach this time at Emerald Airport - where it is pictured above.
For the entire flight, A41-209 was heard to be using the radio callsign of "Stallion 35".
Meanwhile, also on Friday 4 June, Royal Australian Air Force (RAAF) Alenia C-27J Spartan transport aircraft A34-001 as "Wallaby 35" was noted completing airwork in the Fraser Coast region and around Fraser Island on a flight out of and back to RAAF Base Amberley.
All photos taken by 'AC'  ©️
Posted by Damian F at 10:37 PM