On Monday 21 June, Royal Australian Air Force (RAAF) Dassault Falcon 7X bizjet A56-001 was spotted as it visited Rockhampton Airport. It was flying as "Envoy 92" and arrived from Cairns and Cooktown. 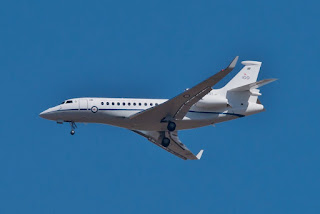 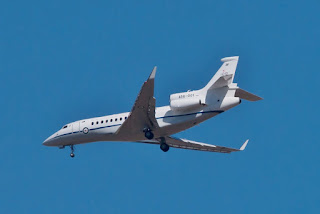 After a couple of hours on the ground, A56-001 "Envoy 92" departed Rockhampton Airport for the Sunshine coast.  It then continued to Canberra. 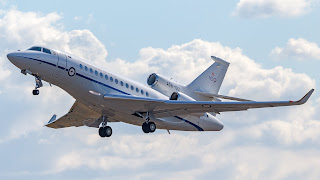 Of interest, A56-001 originally flew up from Canberra to Cooktown and Cairns on Saturday 19 June also as "Envoy 92".
As shown, A56-001 still wears additional decals to commemorate the RAAF's 100th anniversary.
Meanwhile, also on Monday 21 June, RAAF Beech B350 Super King Air A32-670 "Beaufort 26" called into Roma Airport while flying up from RAAF Base East Sale to Cairns.
Photos taken by Scott Harris and Steve Vit  ©
Posted by Damian F at 10:17 PM