Surveillance Australia / Australian Border Force (ABF) Cobham Aviation-operated Dash-8 turbo-props continue to operate Customs and immigration surveillance flights out of various CQ Airports and on Monday 27 June, Dash-8-202 VH-ZZA was spotted resting quietly on the Mackay Airport apron after a heavy shower had rolled through.  It had earlier arrived from a sortie using the new radio callsign of "Borderforce 11". 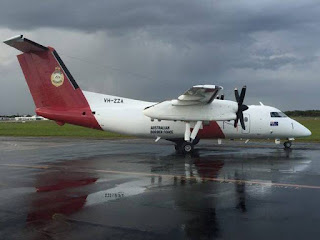 Meanwhile, I also called into Mackay Airport before the rain on Monday 27 June and captured a photo of VH-ZZA - along with Pel-Air SAAB 340A Freighter VH-KDK. 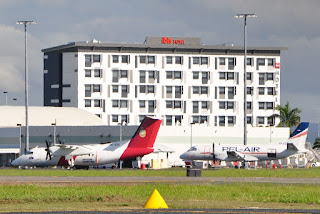 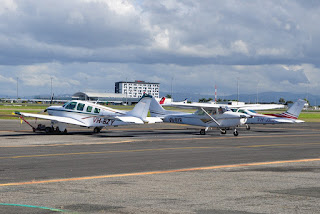 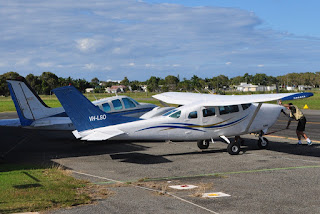 VH-LSO was due to operate from Mackay to Longreach Airport and back on Tuesday 28 June, however this looks have not happened with a 'plan in the system' for the same flight on Wednesday 29 June.

Incidentally, there are also reports that the Island Air flights to Keswick Island have been taken over and are now operated by Chrisair Aircraft Maintenance - however this is not 100% confirmed.

Finally, a couple of other interesting GA movements over the last few days included two visits by the Sunshine Coast-based Aero Dynamic Flight Academy Cessna 310 VH-NFE which first visited on Saturday 25 June flying North from the Sunny Coast to Cairns.  Then on Monday 27 June, VH-NFE returned South from Cairns to the Sunshine Coast again via Mackay Airport.

And Eastern Air Services of Port Macquarie (New South Wales) Beech B200 King Air VH-LNK made a before dawn visit to Mackay Airport in the wee small hours of Sunday 26 June.  It called in from Archerfield and later departed to Narrabri before it returned to Archerfield.