On Saturday 4 June, Jetstar Airways Airbus A320(SL) VH-VFU called into Mackay Airport while operating the JST886 scheduled service from Brisbane.  It is the first visit of this aircraft since some lovely stickers promoting Japanese clothing company UNIQLO. 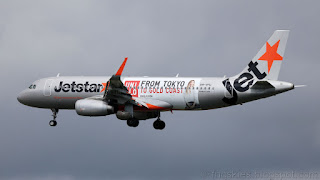 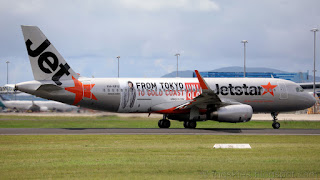 The 'UNIQLO From Tokyo To Gold Coast' stickers were applied in early May. UNIQLO Co., Ltd. is a Japanese casual clothing designer, manufacturer and retailer.  I believe that the company has recently opened their first retail outlet on the Gold Coast, hence the promotional stickers.

VH-VFU returned to Brisbane a little later as JST887.

But that wasn't it for special liveries into Mackay Airport on Saturday 4 June with fellow Jetstar A320 VH-VQG operating the later JST888/889 service also from and back to Brisbane. 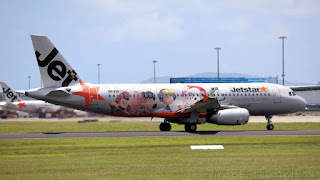 But that still wasn't it for special liveries into CQ on Saturday 4 June with Hamilton Island Airport playing host to a couple of familiar B737-800s in special liveries.  Qantas Boeing B737-800 VH-XZJ - wearing its special Aboriginal art colour scheme called 'Mendoowoorrji' - operated into Hamilton Island Airport on the scheduled QFA870/871 service from and back to Melbourne (Tullamarine). While Virgin Australia (Virgin Samoa) Boeing B737-800 VH-YID operated into Hamo on the VOZ1281/1282 return service from Sydney. VH-YID wears the name 'Tapu'itea'.

My sincere thanks to fantastic FNQ Skies Blog for allowing us share their great photos of these great looking aircraft!

All photos taken by the FNQ Skies Blog  ©
Posted by Damian F at 9:17 PM