The smart little Cessna 525 Citation M2 bizjet VH-WMY of Mitchell Water Australia is becoming a familiar sight at Roma Airport with it making another two surprise visits within the last week. 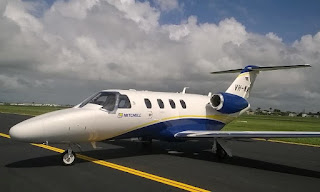 As mentioned below, VH-WMY visited Roma Airport last Tuesday 31 May from Archerfield.

This week, on Monday 6 June, VH-WMY flew from Melbourne (Moorabbin) to Essendon before continuing to Roma Airport.

I'm not exactly sure if it did actually land at Roma, or whether it positioned further North during the course of Monday or early on Tuesday 7 June, as it was later noted departing Injune Aerodrome on its return to Essendon and then Moorabbin.