A fantastic day at Gladstone on Tuesday 14 June with the mighty Queensland Maroons Rugby League football team calling in for a very popular fan day in the industrial city.  The Maroons flew into Gladstone Airport on board Alliance Airlines Fokker F-100 VH-XWN which touched down from Brisbane early on Tuesday as UTY3384.  It had earlier positioned to Brisbane from Townsville where it appears to have had special stickers for the fan day applied on the forward part of the port-side fuselage. 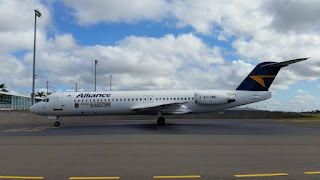 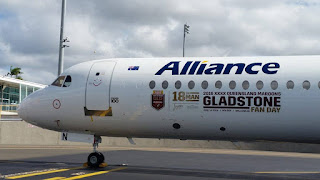 During the visit to Gladstone, the mighty Maroons took part in a street parade followed by a luncheon and memorabilia auction at the Gladstone Entertainment Convention Centre.  The fan day concluded with a junior coaching clinic and autograph signing sessions.

During the afternoon, VH-XWN returned to Brisbane as UTY3385.  It has since positioned back to Townsville - and I assume the special stickers will be removed!