Another great helicopter to visit to Central Queensland Airports this week was Papua New Guinea (PNG) registered Columbia Helicopters Boeing Chinook 234LR helicopter P2-CHL which looks to be ferrying inland from Far North Queensland.  I was fortunate to spot the big civil Chinook shortly after it arrived at Mackay Airport from Cairns in the early afternoon on Wednesday 1 June. 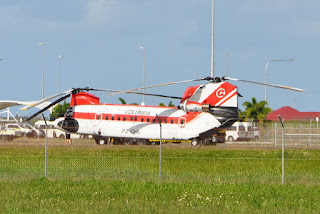 After taking on fuel, P2-CHL continued South to Rockhampton Airport where it remained overnight.

On Thursday 2 June, P2-CHL departed Rocky for Roma Airport - where it was captured by local plane spotter Graham M - before departing further South to Dubbo in New South Wales. 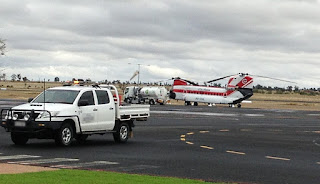 It's eventual destination remains to be seen!

UPDATE!  On Saturday 11 June, P2-CHL was photographed arriving at the Port of Melbourne docks from Melbourne (Moorabbin) Airport in preparation for loading on a ship for export out of Australia.

Of interest, P2-CHL had arrived at Cairns from overseas via Horn Island and Lockhart River on Tuesday 31 May - as pictured below on the FNQ Skies Blog.


Of interest, this is the second big twin-rotor Columbia Helicopters chopper to pass through CQ with Boeing-Vertol 107-II helicopter P2-CHE also passing through Mackay, Rockhampton and Bundaberg Airports in early May while also ferrying South from PNG to the Brisbane docks where it was eventually shipped out of Australia.


Some great photos of another great helicopter to pass through CQ!  Sincere thanks to the local plane spotters as well as the FNQ Skies Blog for allowing us to share their photos!