VH-LMP departed Hamo on return to its Melbourne (Essendon) Airport base late on Sunday 26 June.

While N47TR also departed Hamilton Island late on Sunday 26 June for Cairns but later returned and again was parked for the night. 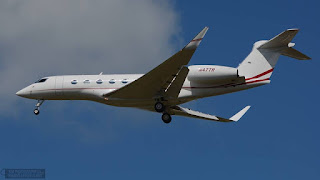 On Monday 27 June, N47TR departed Hamo once again, this time for Darwin where it was captured (above) by local plane spotter Sid M.

Finally, it's worth noting that on Sunday 26 June, Embraer EMB-550 Legacy 500 bizjet N142GZ departed its Mackay Airport base for Townsville.  At the time of writing, it looked to be planned to return to Mackay from Townsville on Tuesday 28 June.