Last week, my darling wife gave me a nice surprise when she sent through a photo from the BP Petrol Station Roadhouse outside Clermont of Red Baron Seaplanes 1964-built Grumman G-164A ‘Sea-Cat’ seaplane VH-KKD on the back of a trailer! 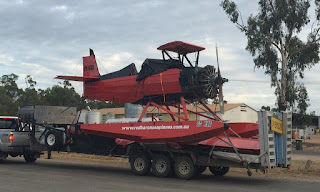 The unmistakable bright-red, two-passenger, open cockpit biplane on floats, was returning to Townsville by road after heading to Perth in March to operate scenic flights over Perth, operating from the Swan River.

The company has been operating scenic flights around Townsville for over 10 years but was recently purchased by WA-based entrepreneur Mack McCormack. 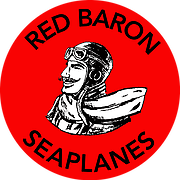 Of interest, VH-KKD was was built in 1964 (MSN 286) as a G-164A Ag-Cat crop sprayer, and registered in the USA as N724Y.  It was registered in Australia as VH-KKD in June 1989, and modified for sightseeing flights. The chemical hopper in front of the pilot was removed and replaced with two passenger seats.  In 1992, the aircraft was converted to a Sea-Cat, with the tailwheel landing gear replaced by floats.

The Red Baron Seaplane office in Townsville can be found at Shop 1, Breakwater Marina, Mariners Drive, Townsville; while their Perth office can be found on the Swan River at Jetty 4, Barrack Street Jetty, Perth.

The Red Baron Seaplanes website contains more information on scenic flight options and pricing.  Check it out at:  http://www.redbaronseaplanes.com.au/