The fourth and final of the big Bond Helicopters Sikorsky S-92A helicopters that have been stored at Caloundra Airport on the Sunshine Coast has passed through Emerald and Longreach Airports while on the return journey to Western Australia. 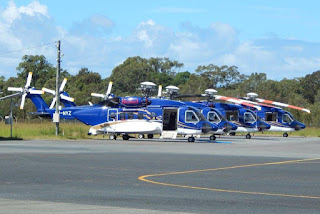 On Saturday 11 June, VH-NWV was noted departing the Sunshine Coast for Emerald and then Longreach Airports.  It then continued to Mount Isa.

It appears that VH-NWV will continue to Tennant Creek and Darwin on Sunday 12 June.

Over the previous couple of months, all four of Bond Helicopters S-92A helicopters - VH-NYW, VH-NYZ, VH-NWD and VH-NWV - have ferried North to Western Australian and the Northern Territory following a period of storage at Caloundra Airport.