On Tuesday 7 June, the Queensland Government (State of Queensland) Raytheon B300 Super King Air VH-SGQ touched down at Emerald Airport from Brisbane.  After staying for the night, it was spotted below early on Wednesday 8 June still parked on the Emerald Airport apron. 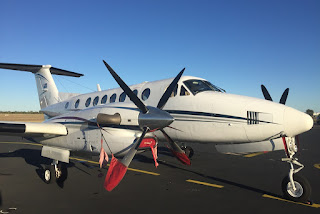 It later departed Emerald for Longreach Airport where it again looks to be spending the night.

Meanwhile, over the previous weekend, a couple of other interesting light General Aviation (GA) aircraft to be noted passing through Emerald Airport while seemingly on ferry flights to and from North Queensland included Torres Strait Air Pilatus Britten-Norman BN2B-26 VH-AEC, which flew in from Archerfield and departed to Cairns on Saturday 4 June after completing planned maintenance.  While Victoria-based Interair / Photomapping Services Cessna 404 VH-TTZ arrived from Cairns also on Saturday 4 June before departing to Archerfield on Sunday 5 June.  It has since returned to its Melbourne (Essendon) base.

VH-TTZ has been operating along the Queensland coast with it noted flying from Bundaberg Airport to Cairns on Tuesday 31 May.