Another day on the Federal Election campaign hustings has seen another visit by to CQ by Royal Australian Air Force (RAAF) Canadair CL-600-2B16 Challenger 604 bizjet A37-002.  On Thursday 16 June, it was noted visiting Mackay Airport before flying into Emerald Airport where it was spotted making a quick stop. 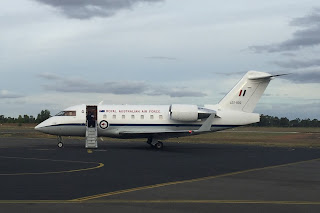 A37-002 was then noted departing Emerald Airport for the South.  It was heard to be using the radio callsign of "Envoy 91".

Earlier on Thursday 16 June, fellow RAAF Challenger 604 bizjet A37-003 departed Mackay Airport for (by the look of it) Warwick.  It had arrived in the sugar city the previous day after also visiting Gladstone and Rockhampton Airports - see Blog post below.  Again it was heard to be using the radio callsign of "Envoy 32".

Finally, the third Challenger 604 bizjet operated by the RAAF's  VIP 34 Squadron in Canberra - A37-001 - actually overflew CQ also on Thursday 16 June while flying from Brisbane to Townsville.  It appears to have then departed to the West.