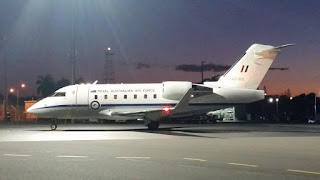 It was noted flying up from the South as "Envoy 96".

It appears that A37-003 brought Federal National Party leader Barnaby Joyce to Gladstone to campaign during this final week of the Federal election campaign.

Moreover, local media reports suggest that Mr Joyce should continue onto Rockhampton on Tuesday 28 June so I would expect that A37-003 should make an appearance at Rockhampton Airport during the morning.