Over the course of this week, five nice Cessna Citation bizjets paid visits to Mackay and the Whitsunday Airports.

On Tuesday 31 May, Gulf Aircraft Cessna 680 Citation Sovereign bizjet VH-PYN made another visit to Hamilton Island Airport.  Unfortunately, its exact movements are not known but this is its second visit to Hamo in the last few days.

It's also worth mentioning that on Tuesday 31 May, Regional Air Piper PA-31-350 VH-RKD operated a return flight to Hamo from its Mackay Airport base.  We are starting to see VH-RKD operating regular flights to Hamo which is a good sign for CQ's newest airline!

While up at Proserpine / Whitsunday Coast Airport on Tuesday 31 May, Altitude Flight Operations (New South Wales) Brisbane-based Metro II VH-SSV called in from Archerfield and Rockhampton Airport,  It was reportedly flying the Channel 9 'Today Show' cast and crew from Rocky to their next destination of Airlie Beach during a week of broadcasting on the road.  VH-SSV eventually returned to its Archerfield base from where it operates general charter and Fly-in Fly-out (FIFO) charter flights - including to CQ.

On Wednesday 1 June, now privately owned Cessna 510 Citation Mustang VH-VSQ touched down at Hamilton Island Airport from Port Macquarie.  It looked to be staying for the night.


The smart little bizjet was once one of a number of Mustangs that the Singapore Flying College operated from the Sunshine Coast.

UPDATE!  VH-VSQ has returned to Port Macquarie from Hamo on Friday 3 June.

On the lighter-side of the visitors to Hamilton Island Airport, Brisbane-based Van's RV-10 VH-LNL touched down from Noosa also on Wednesday 1 June.  I spotted the nice little Van's at the Old Station Fly-in last weekend! 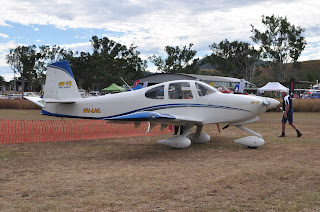 On Thursday 2 June, Brisbane-based Cessna 525A CitationJet2 bizjet VH-MOR paid a brief visit to Hamilton Island Airport.  It touched down from Archerfield and departed a short time later to the Ballina/Byron Gateway Airport in northern New South Wales,

Back on the mainland at Proserpine / Whitsunday Coast Airport, Jetstream Aviation's (Emprja P/L) bright and colourful Cessna 550 Citation II bizjet VH-VDF touched down from the Sunshine Coast on Thursday 2 June before departing a short time later for Coen.

UPDATE!  VH-VDF returned to Prosie from Coen on Saturday 4 June before it departed back to the Sunshine Coast.

And also at Proserpine / Whitsunday Coast Airport but on Wednesday 1 June, Curtin Bros Raytheon 1900D VH-VPZ flew in from its Townsville base.  It then looked to operate a flight out and back to Prosie before it later returned North to Townsville.
Posted by Damian F at 10:04 PM