During the early part of this week, the latest aircraft to start flying in the Alliance Airlines fleet has made its first visits to Central Queensland. 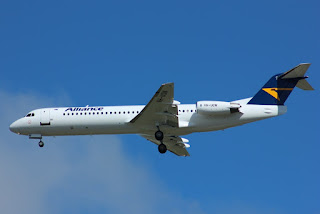 On Monday 13 February, Fokker F-100 VH-UQW was noted operating a Fly-in Fly-out (FIFO) charter flight in and out of Emerald Airport from and back to Brisbane and the Sunshine Coast as UTY4078/4079.

Then on Tuesday 14 February, VH-UQW operated a scheduled flight into Mackay Airport on behalf of Virgin Australia from and back to Brisbane as VOZ613/616.

VH-UQW is the latest Fokker F-100 aircraft to start flying with Alliance Airlines.  It was delivered to the airline in early July 2016 wearing the registration marking OE-LVN and the basic livery of its former operators Austrian Airlines (Austrian Arrows).  It did operate some test flights late in 2016. 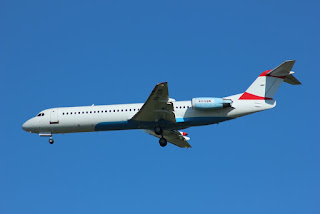 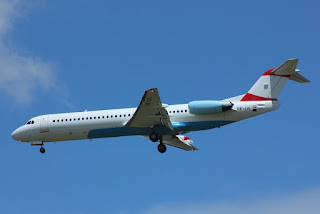 It has since taken up the registration marking of VH-UQY and is still currently parked at Brisbane Airport wearing the basic livery of Austrian Airlines (Austrian Arrows).