On Thursday 23 February, Royal Australian Air Force (RAAF) Search and Rescue (SAR) Sikorsky S-76A helicopter VH-LHZ was noted heading back South from Townsville, calling into Mackay and Gladstone Airports, while heading back to RAAF Base Amberley.


VH-LHZ - which was heard to be flying as "Choppa 9" - was believed to be returning from Townsville where it provided support to the United States Air Force (USAF) which recently deployed some Lockheed Martin F-22A Raptor fighter aircraft of the 90th Fighter Squadron (90 FS) "The Dicemen" based at Elmendorf in Alaska. 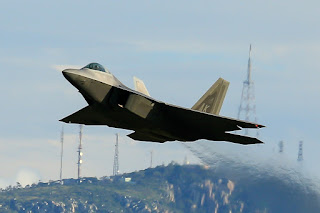 The Raptors deployed from RAAF Base Tindal in the Northern Territory and participated in a wide range of general flying and tactical exercises in the Townsville Field Training Area (TFTA).

Photos taken by Michael Fleetwood and Leroy  ©
Posted by Damian F at 10:18 PM