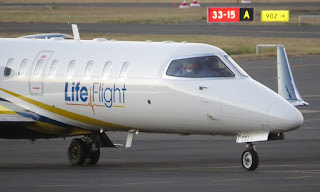 It departed to Rockhampton Airport a little while later.

Then from Rocky, VH-CXJ flew into Charleville and then the Brisbane West Wellcamp Airport before later returning to Townsville.

After around an hour on the ground it returned to Archerfield.

VH-FIZ seems to be returning from operating around Perth after flying into West Australia from Brisbane in mid-January.