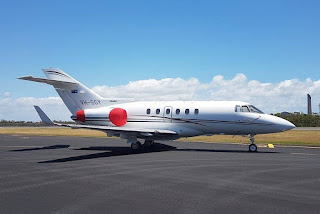 After visiting earlier in the week, VH-SGY initially returned to Rockhampton Airport from Brisbane.  It collected some passengers and departed a short time later for Gladstone Airport where it was spotted (above) resting in the afternoon sun.

It was to overnight however a change of plans for the aircraft saw it depart back to Brisbane shortly after dark.  VH-SGY then reportedly completed a return flight to Cairns from Brisbane.

Meanwhile, after complete some test flights late last week, the Queensland Police Service (Airwing) Raytheon B1900D VH-PSK has again been noted operating the three-times-a-week prisoner transfer flights up and down the Queensland.  It called into Rockhampton and Bundaberg Airports, along with Townsville twice during a busy day of flying from out of Cairns Airport on Wednesday 1 February.

UPDATE!  VH-PSK was again noted operating into Townsville and Mackay Airports twice over the course of Friday 3 February.