On Tuesday 7 February, Australian Army NH Industries MRH-90 Multi-Role Helicopter A40-039 was spotted on approach to and then parked at Rockhampton Airport.  It flew into Rocky from the South. 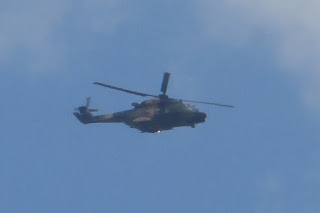 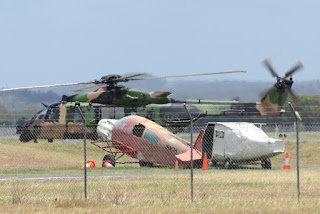 After taking on fuel, A40-039 departed to Townsville.  It was heard to be using the radio callsign of "Destrier 39".

Meanwhile, also on Tuesday 7 February, Royal Australian Air Force (RAAF) Boeing B737-7ES / E-7A Wedgetail Airborne Early Warning & Control (AEW&C) aircraft A30-004 was heard flying North around Hervey Bay towards Hamilton Island where it is believed to have completed airwork including at least one missed approach at Hamilton Island Airport.  It was heard to be using the radio callsign of "Wedgetail 02".

Finally, last Friday 3 February, an unidentified RAAF Beech B350 Super King Air was heard to complete airwork around Rockhampton Airport, including several circuits.  It flew down from Townsville and later returned to Townsville.