Cessna 560 Citation Ultra Bizjet VH-MMC Back at Emerald Airport Once Again - Plus More!

On Tuesday 21 February, the familiar sight of Mackellar Mining Equipment / Flight Options (Australia) Cessna 560 Citation Ultra bizjet VH-MMC was yet again back at Emerald Airport.  It arrived from its Sunshine Coast base. 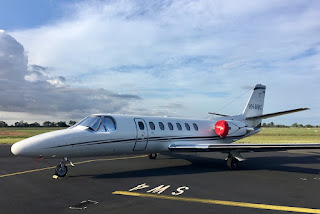 At the time of writing, it was due to return to the Sunny Coast on Thursday 23 February.

It's also worth noting that a couple of familiar corporate turboprop aircraft have also called into Emerald Airport in recent days, including the Queensland Government (State of Queensland) Raytheon B300 Super King Air VH-SGQ which arrived from Brisbane on Wednesday 22 February.  It departed to Kidston and then Townsville before returning to Brisbane later in the day.

And visiting Emerald Airport once again this week was the smart little Vanderfield Pilatus PC-12/47 VH-WPH which is becoming a very familiar sight at CQ Airports.  As mentioned below, it flew in from Toowoomba and Bundaberg Airports on Monday 20 February before departing back to Toowoomba on Tuesday 21 February.

Meanwhile, a bit more bizjet action around CQ with the Queensland Police Service (Airwing) Cessna 560 Citation Ultra bizjet VH-PSU back on prisoner transfer duties on Wednesday 22 February.  It flew from Brisbane to Cairns via Rockhampton and Townsville.  It later returned to the capital over the same route.

And finally, after spending the last month in Sydney, locally-based Embraer EMB-550 Legacy 500 bizjet N142GZ was due to return to its Mackay Airport base on Thursday 23 February. 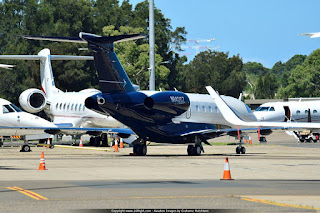 Local aviation photographer Grahame H captured N142GZ on a busy General Aviation (GA) apron at Sydney Airport on Tuesday 21 February.  N142GZ was due to return to Mackay on Wednesday 22 February but this flight was cancelled.

Grahame runs the fantastic 16Right.com website which features more of his quality images, along with excellent live aircraft tracking resources via ACARS and ADSB.  Check the website out at:  http://www.16right.com/

Photos taken by 'AC' and Grahame Hutchison  ©
Posted by Damian F at 9:53 PM