Cessna 560 Citation Ultra Bizjet VH-MMC Arrives at Emerald Airport - Plus a Few Lighties Around too!

On Tuesday 7 February, Mackellar Mining Equipment / Flight Options (Australia) Cessna 560 Citation Ultra bizjet VH-MMC called into Emerald Airport from its Sunshine Coast base.  It appears to be staying for at least the night.


UPDATE!  On Thursday 9 February, VH-MMC returned to the Sunshine Coast from Emerald. 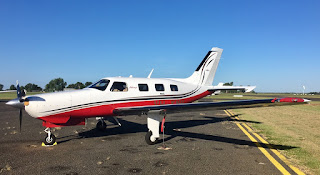 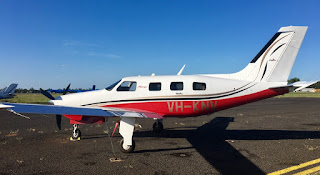 The sleek little aircraft called into Emerald from Maitland on Sunday 5 February and was due to return there on Wednesday 7 February.

On Thursday 2 February, and interesting arrival in the form of Toll Freight Metro 23 VH-UZN which looked to be operating an additional flight / charter flight as TFX902 flying from Brisbane to Newcastle (Williamtown) and on to Emerald Airport.  It later returned to Brisbane.

Finally, after arriving into Emerald Airport from Brisbane in late January and operating the week-daily freight run to Barcaldine and Longreach Airports and back, General Aviation Maintenance (GAM) AeroCommander 500-S VH-UJV departed Emerald Airport for Bourke, Broken Hill and Adelaide on Thursday 2 February.  It has since commenced freight operations out of Adelaide around various parts of South Australia. 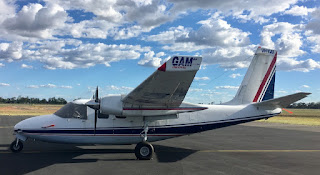 Replacing it was AeroCommander 500-U VH-YJU, which was operating freight flights around Victoria and South Australia until Wednesday 1 February, when it then flew into Emerald Airport directly from Adelaide.  On Monday 5 February, VH-YJU commenced flying on the week-daily freight run from Emerald to Barcaldine and Longreach Airports.
Posted by Damian F at 11:25 PM