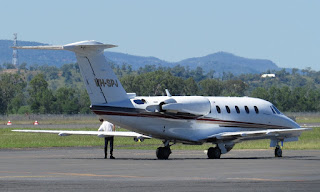 The sleek Citation is back in CQ after passing through Hervey Bay (Fraser Coast) and Emerald Airports while heading North to Cairns.

After a short time on the ground, VH-SPJ was noted departing Rocky for Bankstown.

Meanwhile, on Tuesday 5 December, Avcair (Norris Aviation) LearJet 60 bizjet VH-XPN touched down at Gladstone Airport for a very short period of time – possibly on a training flight.  It looked to fly up from and then return to its Brisbane base.

Sincere thanks to local plane spotter Kayanne H for taking the time to capture and send through this great photo of VH-SPJ!