A nice large helicopter to pass through Central Queensland on Thursday 7 December was Bristow Helicopters Sikorsky S-92A Helibus VH-ZUJ, which passed through both Emerald and Longreach Airports while on a ferry flight to the Helitek Helipad in Brisbane. 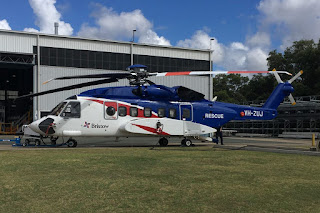 VH-ZUJ departed Longreach Airport for Mount Isa where it looked to be staying for the night.

As pictured above, VH-ZUJ was originally delivered to Australia at Perth Airport in November 2016 along with another Bristow S-92A with American registration N392BG.  They were delivered from Bristow’s American base at Acadiana Regional Airport, New Iberia, Louisiana, on board Volga-Dnepr Airlines Antonov AN-124-100 RA-82079 and were eventually trucked to Broome where they had been operating from.