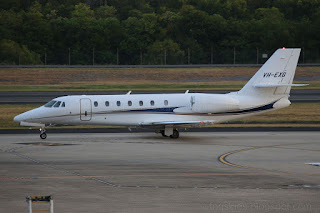 VH-EXG then looked to head West and was then noted calling into Moranbah Airport.  It returned to Brisbane during the early part of the afternoon.

Meanwhile, late on Thursday 14 December, LifeFlight (Aeromed) LearJet 45 bizjet VH-VVI arrived into Proserpine (Whitsunday Coast) Airport from Townsville.  After a very short time on the ground, it later returned to Townsville.  I presume this was a training flight and not a medevac flight.

Finally, after departing its Mackay Airport base for Brisbane earlier in the week, Embraer EMB-550 Legacy 500 N142GZ returned to Mackay Airport from Brisbane also on Thursday 14 December.