On Thursday 21 December, American registered Bombardier BD-700-1A10 Global 6000 bizjet N60XC was spotted on the ground at Rockhampton Airport.  It had made a before-dawn arrival from Seoul, South Korea via Townsville. 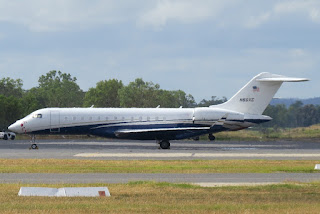 The sleek bizjet is becoming a semi-regular visitor to CQ having made several visits during different times of this year.

At the time of writing, N60XC is due to depart Rocky for Sydney later on Thursday 21 December.