Corporate Aviation Bell 429 helicopter VH-EQP touched down at Bilo from its Southport base on the Gold Coast.  It then departed to Middlemount and Nebo Aerodromes before finishing the night parked at Mackay Airport where it was photographed below. 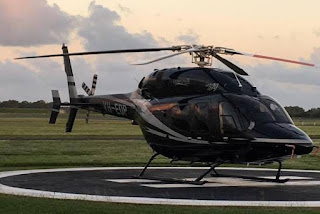 Also visiting Biloela / Thangool Airport on Wednesday 13 December was the familiar sight of Mackellar Mining Equipment Cessna 560 Citation Ultra bizjet VH-MMC.  It arrived from and later departed back to its Sunshine Coast base.