It arrived from the Sunshine Coast and appears to have flown there the previous day from Archerfield.  VH-SYB had arrived into Archerfield from the South on Sunday 26 November. I presume that has also been repainted and had RACQ LifeFlight titles added as shown above on VH-SYG.

As mentioned above, VH-SYB looks to be joining fellow Eurocopter MBB-BK 117 C-2 (EC145) helicopter VH-SYG operating medical retrieval flights for RACQ LifeFlight out of their Bundaberg Airport base.

Indeed on Wednesday 6 December, VH-SYB was noted completing a flight from the Bundaberg Base Hospital helipad.

Of interest and as mentioned below, both MBB-BK 117 C-2 (EC145) helicopters VH-SYB and VH-SYG were until recently operating for the Ambulance Service of New South Wales (NSW) out of Bankstown Airport - VH-SYB operating as "Rescue 21" and VH-SYG as "Rescue 22".  They operated alongside three Agusta AW139 helicopters - VH-SYJ, VH-SYV and VH-SYZ. 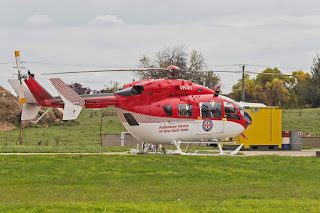 The Greater Sydney Area Helicopter Emergency Medical Service (GSA-HEMS) contract has recently been awarded to the Toll Group who has officially launched the Toll Rescue Helicopter Service in partnership with the Ambulance Service of NSW to provide aeromedical services to communities of NSW in the Southern Zone including rescue helicopter bases at Bankstown, Wollongong, Orange and Canberra.