It looked to touch down from Melbourne (Tullamarine) and was heard using the flight number and callsign of ‘MMD6430’ / “Mermaid 6430”.

At the time of writing, it appears that OY-EJD is still parked on Hamo. 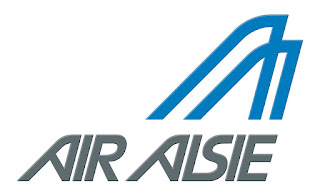 Air Alsie (http://www.alsie.com/) is a Danish charter airline headquartered in Sønderborg and based at Sønderborg Airport, in Denmark.  They primarily which operates business jet services with a fleet of 19 aircraft (as at the start of 2017).

Meanwhile, also visiting Hamilton Island Airport but late on Wednesday 6 December was Vanguard Aviation Cessna 525 CitationJet1 bizjet VH-DAA. It looked to arrive from and then depart back to its Archerfield base.

Finally, also at the time of writing, a fairly recent addition to the Australian bizjet scene in the form of UP Aviation of Victoria Bombardier BD-700-1A10 Global Express bizjet VH-UPH is expected to touch down at Rockhampton Airport around lunch time on Thursday 7 December from Townsville.  Nice!
Posted by Damian F at 8:22 AM