While researching for the Blog post about the recent scrapping of a pair of Skytrans Airlines Dash-8-100 aircraft - see below - I also discovered that a couple Super King Air turboprop aircraft that have frequently visited Central Queensland have recently left Australian skies and departed to new owners and operators overseas.

Sutherland Aviation Raytheon B300 Super King Air VH-WXC (msn FL-506) was a frequent visitor to different parts of CQ after it was delivered to Australia from Great Britain in early 2011 as G-POWB.


VH-WXC was cancelled from the Australian register on Thursday 26 October after it was sold in the United States of America (USA) and re-registered as N506KB of Aerosolutions Group at Wilmington, Delaware. 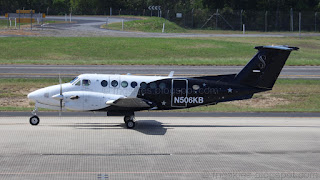 It was photographed above at Cairns Airport on Monday 6 November where it arrived from Bankstown and later departed to Biak (Indonesia), Saipan (Northern Mariana Islands) and Tokyo (Narita) where it arrived the next day.

Meanwhile, Brisbane-based Hawker Beechcraft 350i Super King Air N841KA, which was registered to Ballard Aviation of Newton, Kansas, departed Brisbane for Port Moresby on Sunday 8 October before continuing to Guam and Osaka (Kansai) in the days after.


N841KA has since flown through Alaska into mainland USA.

As I've said before, I do find this sort of stuff fascinating!