On Saturday 23 December, Edwards Coaches Cessna 525 Citation CJ2 bizjet VH-RJB was spotted on the ground at the Whitsunday Airport at Shute Harbour.  It had earlier arrived from Armidale via Sydney. 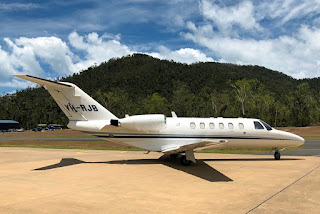 After being refuelled, VH-RJB returned to its Armidale base.

Meanwhile, a very attractive local 'warbird' in the form of Mackay-based Yakovlev Yak-18T VH-IBT was also spotted at the Whitsunday Airport also on Saturday 23 December. 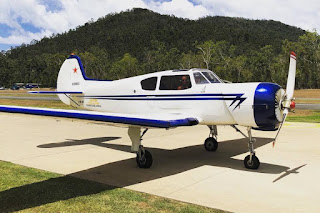 The Russia built warbird is powered by a single Vedeneyev (Ivechenko) M-14P Piston engine.  It was also interesting to note that VH-IBT has its past registration marking (CCCP-44293) and home-country (Kazakhstan) under its current registration marking.  There is also an import badge for Red-Star Aviation.

Finally, over at Hamilton Island Airport, also on Saturday 23 December, Graham Aviation Cessna 510 Citation Mustang bizjet VH-FNI flew in from Cairns.  After a little while on the ground, it departed back to Cairns before continuing to its Mareeba base.

All photos taken by Lee Holloway  ©
Posted by Damian F at 3:28 PM