After last visiting Central Queensland in mid-2016, American registered and privately operated LearJet 36A bizjet N82GG arrived into Rockhampton Airport on Saturday 16 December, believed to be from the Gold Coast. 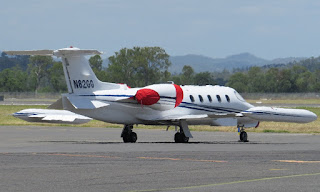 As shown in the photo above (and in previous photos posted on the CQ Plane Spotting Blog during its visits in 2015 and 2016) the LearJet has a camera on the forward-starboard side of the fuselage and is again in Australia once again completing aerial survey flights.  It was reported during its previous visit to Australia N82GG is operating aerial mapping sorties for Nearmap - the international provider of high resolution aerial imagery.

Sincere thanks to local plane spotter Kayanne H for sending through this great photo of the LearJet which is not parked in the most friendly spot for photos!