During a recent visit to the Whitsunday Airport at Shute Harbour, I was able to grab a quick photo of the recently registered GSL Aviation Cessna 208B Grand Caravan VH-TGX. 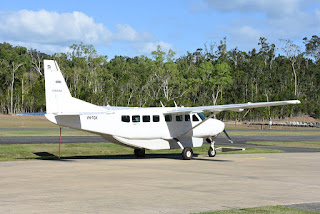 VH-TGX was delivered to GSL Aviation in late September wearing the American registration marking of N910HL.  It was placed onto the Australian register at the start of October after completing it trans-Pacific ferry flight from Merced, California via Honolulu, Majuro and Townsville.

VH-TGX is currently operating alongside fellow Cessna 208 Caravan VH-TIY out of the Whitsunday Airport on their numerous scenic and other general charter flights around the region. 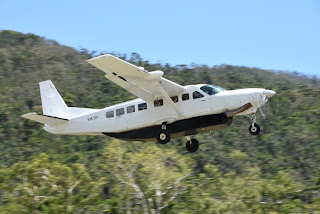 Finally, in late October we reported that GSL Aviation was operating another Cessna 208 Caravan VH-KNQ, which appeared to be 'cross hired' from the Darwin-based Kakadu Air Services.


Since the start of December, VH-KNQ now seems to have commenced operations with Gold Coast-based Seair Pacific / Istlecote on their daily transfer flights in and out of Lady Elliot Island and the Fraser Coast, along with the occasional run into inland CQ on Fly-in Fly-out (FIFO) charter flights. It was noted flying into Middlemount Aerodrome from Hervey Bay (Fraser Coast) Airport last Thursday 7 December.
Posted by Damian F at 6:28 PM