After arriving on the weekend and seemingly not moving at all, on Wednesday 20 December, the visiting American registered and privately operated LearJet 36A bizjet N82GG departed Rockhampton Airport for the Gold Coast.  It then headed further South, reportedly to Melbourne (Essendon). 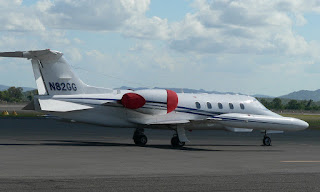 As shown in the photo above (and in previous photos posted on the CQ Plane Spotting Blog during its visits in 2015 and 2016) the LearJet has a camera on the forward-starboard side of the fuselage and is again in Australia once again completing aerial survey flights.  I have been informed that N82GG may be operating aerial mapping sorties for Google.

Meanwhile, a couple of other bizjet movements in CQ occurred on Tuesday 19 December when Shortstop Jet Charter Dassault Falcon 900C VH-OAA made yet another visit to Hamilton Island Airport.  It arrived once again from its Melbourne (Essendon) base.  At the time of writing, VH-OAA is due to return to Essendon on Thursday 21 December.

Also on Tuesday 19 December, LifeFlight (Aeromed) LearJet 45 bizjet VH-VVI "Ambulance 451" arrived into Mackay Airport from Cairns.  It looked to be operating a medical retrieval flight and later departed to Brisbane.

Finally, a couple of corporate turboprop movements this week have included Pegasus Air / Agile Aviation (of South Australia) Pilatus PC-12/47E VH-TCP departing Hamilton Island Airport for Charleville and its Adelaide base on Wednesday 20 December.  It had arrived direct from its Adelaide base over the weekend.  And The Queensland Government Airwing (State of Queensland) Raytheon B300 Super King Air VH-SGQ visited Gladstone Airport from Brisbane on Tuesday 19 December.