On Friday 29 December, Qantas Airways Boeing B737-800 VH-VYG made its first visit into Central Queensland after it had been re-painted into the airline's new 'Silver-Roo' colour scheme. 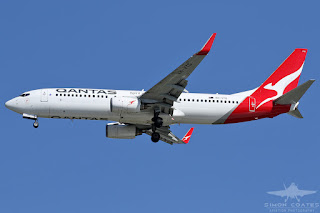 VH-VYG was noted arriving into Hamilton Island Airport from Melbourne (Tullamarine) as QFA870 and marks the second time that the new and updated Qantas livery and kangaroo logo has appeared in CQ on a Qantas B737-800. 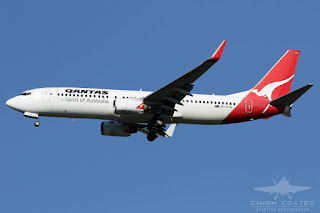 Now, with as many as eight of the current Qantas Boeing B737-800 fleet now adorned in the new 'Silver-Roo' livery, we hope to start to see a few more pop into CQ at Hamilton Island Airport over the coming months!

All photos taken by Simon Coates  ©
Posted by Damian F at 7:06 PM