Making a spectacular arrival into Rockhampton Airport late on Sunday 10 June was Atlas Air Boeing B747-446 N464MC.  It touched down directly from Hickam Field (formerly Hickam Air Force Base) in Hawaii, flying in as GTI8362 "Giant 8362". 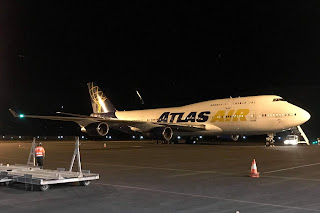 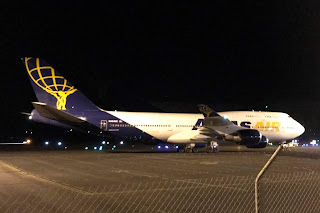 The jumbo taxied in and parked on Gate 6 on the Southern end of the Rocky Airport parking apron.  It brought military personnel and cargo into Rocky to participate in joint military Exercise Hamel 2018 which will be conducted in the nearby Shoalwater Bay Training Area (SWBTA) during June and July.


Senior military officials have asked residents of Rockhampton to be"alert but not alarmed" in the coming weeks as more than 9,000 soldiers congregate in the city for war games.  Exercise Hamel, an annual activity being in Shoalwater Bay, will test the Australian and US Army's collective fitness for fighting and is due to begin at the end of this month and run into July.  The training exercise involves amphibious landings, tanks, other armoured vehicles and artillery moving throughout the district.

At the time of writing, N464MC looked to be being prepared for an overnight stay.  Stay tuned for the latest information on its planned departure - we will do our best to bring it to you first!

Sincere thanks to local plane spotter Kayanne Hardsman for taking the time to capture and send through these great photos and video of the jumbo's arrival!  Stay tuned for many more!

All photos and video taken by Kayanne Hardsman  ©
Posted by Damian F at 8:56 PM