On Sunday 10 June, Royal Australian Air Force (RAAF) Boeing B737-7DT(BBJ) A36-001 made a surprise but most welcome visit to Bundaberg Airport, touching down from Brisbane as "Consort 96". 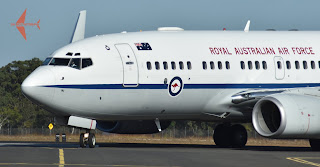 The RAAF VIP 34 Squadron aircraft brought the Prime Minister of the Solomon Islands Rick Houenipwela and his wife Rachel to Bundy as a part of his tour of Australia which also see them visit Brisbane, Sydney and Canberra.


After some time on the ground, and after the Prime Minister and Mrs Houenipwela's engagements were complete, A36-001 was noted departing Bundaberg Airport for Brisbane.