As I was writing the Blog post above, I note with interest that late on Saturday 30 June, Brisbane-based Cessna 525A CitationJet2 bizjet VH-MOR is flying to Emerald Airport from Archerfield via Brisbane.


It is due to depart back to Brisbane and Archerfield later in the evening.

Meanwhile, VH-MOR appears to have continued flying once-a-week from Archerfield and Brisbane to Moura each Wednesday, returning on Thursday.  It appears to have completed these flights at least over the last two week.

Finally, earlier on Saturday 30 June, Gippsaero GA8 Airvan VH-EHS was noted flying West of Emerald through Central Queensland heading North.  While Australasian Jet Piper PA-31-325 VH-ZMJ was due to fly into Emerald Airport from Archerfield but ended up returning to Archerfield.  It then flew into Mackay Airport before continuing to Ingham.

While up at Hamilton Island Airport, on Saturday 30 June, South Australian-based Piper PA-46R-350T Malibu Matrix VH-ZXJ arrived from Aldinga via Charleville Airport.  And both arriving into Hamo on Friday 29 June was Schofields Flying Club (of New South Wales) Beech 76 Duchess VH-RJS from Rockhampton Airport (where it is pictured below) and Hawker Beechcraft G58 Baron VH-EZD which arrived from its Monto base. 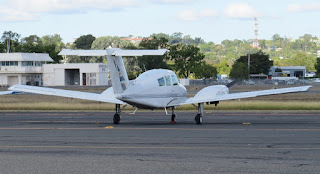 All three seem to be staying for at least the night.

Photos taken by the Col B and Kayanne Hardsman  ©
Posted by Damian F at 6:18 PM