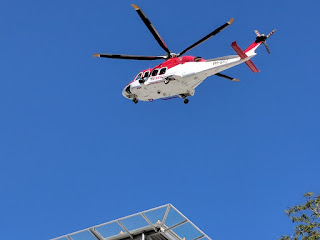 It appeared to come into Rocky from the Shoalwater Bay Training Area (SWBTA) where it is presently based in support of the joint Military Exercise Hamel 2018.

It also comes a day after Australian Army NH Industries MRH-90 Multi-Role Helicopter A40-020 completed a medical evacuation drill by also landing on the Rockhampton Hospital heli-pad on Monday 18 June.


Meanwhile, also on Tuesday 19 June, there were a couple of other helicopter visitors into Rockhampton Airport in support of Ex Hamel 2018.

An unidentified Australian Army MRH-90 helicopter popped in briefly during the morning as "Hustler 11", while during the afternoon, another called in as "Warhorse 31".  Later still, another MRH-90 believed to be A40-041 also visited Rockhampton Airport but as "Kraken 11".