Yet again on Wednesday 6 June, Royal Australian Air Force (RAAF) Beech B350 Super King Air A32-339 "Torch 36" was back in the air and back in parts of Central Queensland. 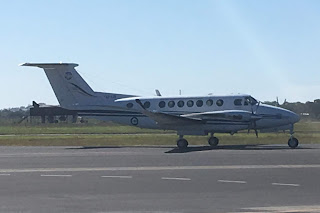 It was noted flying up from the Sunshine Coast and completed a missed approach at Rockhampton Airport before it continued to a position East of Mackay where it completed some low-level airwork.  A32-339 eventually landed at Mackay Airport - as shown above.

During the afternoon, A32-339 "Torch 36" returned South from Mackay Airport via another missed approach at Rockhampton Airport before it flew East and again completed some low-level airwork.  The Super King Air then climbed and tracked inland towards Monto, Gayndah and Murgon before it eventually returned to the Sunshine Coast.